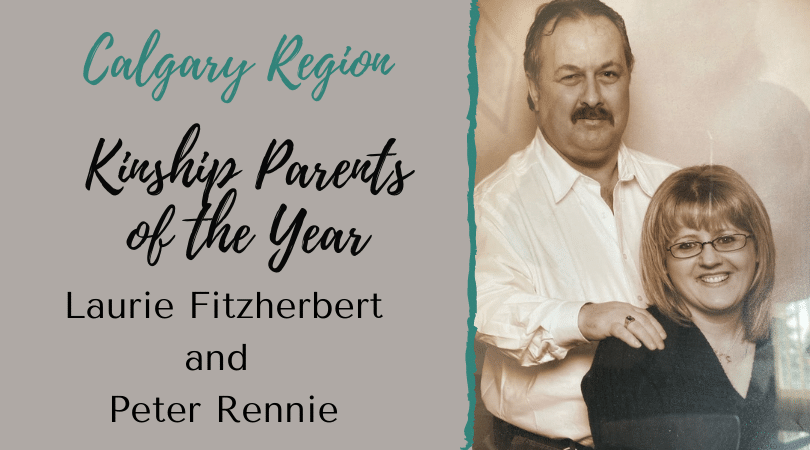 Laurie Fitzherbert and Peter Rennie have been caring for Laurie’s two nieces for the last eighteen months. The girls have come a long way since first coming to stay with their Aunt and Uncle, overcoming developmental, medical, and social struggles. Laurie states that it has to be the kids first because she knows what those feelings are like. Having grown up in a neglectful home, Laurie experienced an alcoholic father, domestic violence, and food insecurity.

Her compassion and self-described “big heart” for her nieces is matched by that of her husband Peter. Described as a teddy bear, Laurie says Peter does much more than he realizes, whether it’s- role modeling what a father-figure and partner is to the girls or providing Laurie with some self-care time while he looks after the girls.

However, this is not their first time opening their home to family. Previously on the East Coast they had also provided kinship care for other children, but there was no mentorship, explained Laurie. “Nobody ever called to see how we were doing or if we needed anything.” That was one of Laurie’s favourite experiences: meeting and building a relationship with her mentor through the Calgary and District Foster Parent’s Association Mentor Program. With the unique stress that comes with being a kinship home, Laurie was able to turn to her mentor for a listening ear and direction.

As noted on their nomination form, the level of care that Laurie and Peter provide for the girls has always been impressive. They advocate for their nieces while maintaining a challenging relationship with the girls’ mom.

Reflecting on the last year and half, Laurie shares a lesson learned: “I never thought I would get attached, but I’ve learned that biology – birthing a child – doesn’t make you a mom. I didn’t think you could love and have a bond like that.”

Please Login or Register Below